Predawn always feels surreal to me.*

But after talking to the dead woman I’d known as “Mom,”  this one was especially hyper-surreal.

On the way home, I watched a thousand shades of orange rise to kiss the Earth awake. It was the perfect time of day to be on the road, traveling with a smattering of LA cars instead of a jam-packed river, with every stoplight turning green as I approached. All of this made me feel something I often don’t—wonderment.

How often do you notice something different about reality that you normally wouldn’t? Like sensing a soul behind an animal’s eyes . . . hearing whispered words from the rustle of leaves . . . or catching a strong, yet fleeting connection with a stranger as you pass each other by.

Once home, I headed to the fridge, and noticed the piece of art I’d made at a women’s retreat just a few days before. I’d scrawled these words, “Pierce the Veil” with colored pencils, and then drew this sword piercing a sheer curtain, with a smiling cat’s head as the dot on the “i” and angel wings on the “l.” I’d cut the whole piece into the shape of a huge heart.

My intention in writing “Pierce the Veil” was this: 1) find a secret passageway to the Other Side, the afterlife (without me dying, of course); and 2) maybe get some nice story tips from my dead white cat Emma because I’d hit a serious roadblock in the novel I was writing about time-traveling cats.

The next morning, my friend Liz Meyer called. She and I hadn’t talked for months. In LA, people who like each other but live farther apart than five or six miles have a tricky time getting together. You might as well live in another state. She’s a voice coach and a Midwest transplant like me, who also does—well, stay with me on this—“soul healing and retrieval.” At first, I said nothing about my supernatural, dead Mom event, or that “Pierce the Veil” thing. Nothing.

“How ya doing?” Liz asked. “Hey I’ve got some time – just waiting for my son to finish class.” She felt compelled to call me, she said, and maybe do a reading. Since moving to LA fifteen years ago, I’d had plenty of “readings.” Let’s say, I’ve learned to not be so open.

“Are you open?” she continued. “If I do a reading with these Atlantean cards?” She went on to describe the deck called Liquid Crystal Oracle by Justin Moikeha Asar. The cards have something to do with Atlantean ancient knowledge, blah, blah, blah. Supposedly part of a system of crystal healings that activate these “Octahedrons of Light,” some kind of geometric woo-hoo, sacred stuff.

“No, I really can’t afford it,” I told her (while also realizing how stupid that just sounded because she’s one of the most generous people I’ve ever met).

“And to be honest, Liz, I wasted too many years on that Tarot crap.”

Liz sat in her Toyota Avalon in a Petco parking lot near her son’s school, and asked me over the phone how many times she should shuffle the 77-card deck. After four or five shuffles, I finally picked a card: #29.

What Liz read next from that card called “Dioptase” made my blood freeze:

“Feel my touch, let it open the Emerald Green Stairs into your heart and together let us ascend them slowly, for today there is only completion and healing.

“I ask you now to look back in anger, resentment and judgment no more, for I have come to lovingly guide you in the art of focused manifestation, of which your life is the result.

“Remember, the Heart is Pure beyond the Veil of Self Judgment and together we will lift it so, through your own Emerald eyes, you will see the perfection that you are.

“Feel the Emerald shower of my compassion surround you and let it detach you into freedom. I hold the pure healing intent of the Green Ray at your disposal anchored into the black of the earth.”

“In my presence the lightning flash of Emerald light has healed the scars of the heart and now lives in you.”

The card ended with this Affirmation: I am all Loving, my Heart is Pure. 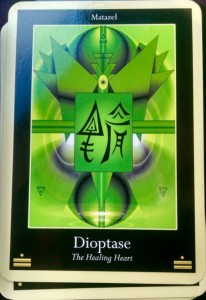 First, my sign-off for years has been “Pure Heart, CJ”

Second, when I wrote “Pierce the Veil” in that art exercise, I never thought of “Self Judgment” as something I had to pierce. But let’s say, I’ve been aware for decades of my propensity to whip my own tender back.

Third, I’d just written a scene in my time-traveling cat novel, in which a green flash of light shoots across the sky, and zaps into the eyes of an Earth cat, giving him the power to read human minds (nod to a cool Egyptian myth).

When I told Liz about those pyramids of silver-gold shooting off Natalie’s right shoulder while she was channeling Mom, it was Liz’s turn to freeze. This Healing Heart card went on to describe the Octahedron pyramid shapes once used by Atlantean priests and priestesses to activate light and change, and it’s colors as mentioned in the card are . . . yep, silver and gold.

So what does all of this mean?

If we shrug it off, or wave our hands to dismiss, then absolutely nothing. And that’s okay.

But, personally, I can’t shake the feeling that these kinds of mystical, weird-shit messages, and inexplicable phenomena of what we love to call “reality,” are still waaaayyyyy beyond what our underdeveloped human minds can fully grasp and explain.

A writer friend of mine, Kira Rosner (author of When Souls Take Flight) put it this way: maybe I had a crazy-hard childhood and other major bumps along the way, so I’d be prepared to help others with their pain, their healing, their growth.

Maybe there’s a much bigger picture here than any of us can see. Maybe before I was born, Kira added, I decided to “take one for the team” to advance the vision of possibilities for other souls out there.

Or, maybe, I just had angry, overwhelmed parents who were disillusioned with their miserable lives, and they took it out on me, and there’s nothing more to it. Maybe we don’t live on after our bodies die. And maybe none of this means a damn thing.

But somehow, out of the Darkness, I survived. And, the only way out—was to shine my effin’ Light.

My first solo-authored book is about overcoming life adversity,
THE LIFE RAFT: Rise Above the Tides & Rescue Your Dreams
at Amazon / B & N

In both her editing and inspiration, CJ Schepers shines a mighty light! She becomes an unforgettable member of any publishing team.